A Growing Class of Offenders? 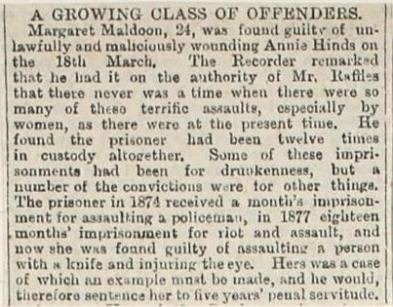 In 1882 Liverpool Echo published this article, lamenting the growing number of violent assaults committed by women, against women in the city.  In Liverpool, as elsewhere in the country, the ever present spectre of female deviance both upset the sensibilities, and captured the imagination of Victorian men, women, and children alike. Whether it was Charles Dickens’ fictional tragic moll Nancy at the beginning of the era, or the ghoulish real life serial killings of the ‘Black Widows’ towards the end of the century.

Those fascinated with crime, then as now, perceive a somewhat contradictory being when they call to imagination the idea of a Victorian female offender; Lascivious, immoral, scheming, lazy and dishonest – yet at the same time almost a victim, a weak and passive creature corrupted and invariably led into vice by their iniquitous male counterparts. The nineteenth century woman who committed crime was and is all too often represented as either the tragic heroine or dastardly villain of her own story. However, these melodramatic roles are very rarely ones occupied by real people navigating everyday life.

Rather than being a homogeneous ‘class of offenders’ that could be easily identified and profiled, Victorian female offenders were in reality a diverse collection of individuals. A fact reflected in both their backgrounds and their crimes. Some came from the depths of poverty, others from a world of luxury and privilege.  Some had immigrated to England in hope of a better life, whilst some had never ventured further that the street they were born in. To some, crime was a career and their offences numbered in the hundreds, others offended only once. Women experienced both reform and relapse at the hands of Victorian policing and punishment. Female offenders were thieves, housebreakers, pickpockets, fraudsters, coiners, prostitutes, brothel owners, drinkers, fighters, murderers, and more. Yet at the same time they occupied lives as workers, friends, outsiders, orphans, partners, daughters, mothers and sisters. They were women with hopes and aspirations, fears and responsibilities. Leading real lives and making real, and difficult decisions.

By combining the two worlds which many women straddled – the criminal and the personal – it is possible to get a better idea of the real women behind the Victorian myth of female crime, and to pursue the tantalising answers to the who, what, and why of offending.

Posted in History and Crime and tagged Life-cycle, Offending